Many thanks to Vincent Sdrigotti for allowing Panda to use this article on our site. Vince is a teacher at one of our schools and also part of our teaching development team.

I’m writing this particular article for anyone who is considering coming to China to work as an EFL teacher in a kindergarten and would like to know what it actually entails. The first thing you need to know is that there are currently two types of EFL teaching in a Chinese kindergarten. The first one is what I do, which is to go around from class to class teaching 15 to 30 minutes English classes.  The kids are divided into four levels of classes. Usually each kindergarten gives each level some form of cute name, in mine they are called, in order from youngest to oldest: Star, Moon, Earth and Sun, but often they are fruits or animals. The second type is more of a homeroom teacher and stays with one class all day. I haven’t actually done this type of teaching but from what I’ve heard, the teacher only gives an actual English class twice a day at most, usually once in the morning and once in the afternoon. The rest of the time the teacher is taking care of the kids like a normal teacher while talking to the children in English and creating an English environment without actually teaching. Since I haven’t done this type of work, I will be focusing on the first type of teaching.

My kindergarten follows a four-book set of English language books with each book lasting for one year with the curriculum of each year based off of the book for that year. Star class is mostly the basics: ABCs, colours, numbers, some animals. In moon they start to learn more general vocabulary by category: Shapes, family, different types of adjectives and verbs. Earth is where they start focusing on phonics and constructing simple sentences. Sun mostly learns more advanced vocabulary and daily life sentences. Usually by the time the kids graduate from Sun class, the last class before entering grade 1 in primary school, their English level is about the same as most native speaker kids of that age, as long as they’ve been applying themselves and keeping up with the curriculum. Some parents also give their kids after school or weekend classes in language training centres and each class usually has three or four kids that are better than the rest. I also do an advanced English class, which my kindergarten charges the parents extra money for, one at the earth level and one at the sun level, where the kids learn grade 1 level English. 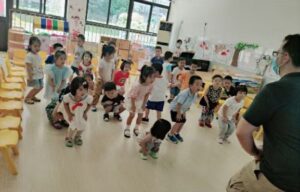 Our day, my colleague from England and I, starts when we get to our office around 7:50 in the morning. Officially we start work at 8:00. At 8:15, we go out to the gate and greet the kids, which mostly consists of giving high fives and saying good morning to each kid as they come in. For the teacher, this allows us to build rapport with the children outside the formality of the classroom. For the school, it allows the parents to see that not only does the kindergarten have foreign teachers (it’s a status thing) but that they are interacting with the kids. We stay at the gate till 8:50 then head back to our office. In most Chinese kindergartens, the first class is usually around 8:30 or 9:00. Currently, I start my first class at 9:10. I have four classes in three different levels in a row and finish the first batch of classes at 10:50. In general you have a group of classes in the morning from 9 to 11 and then 1 or 2 in the afternoon. If the kindergarten has a few different EFL teachers then sometimes one of them will have all the classes from a certain level. This year, because of scheduling concerns, my colleague and I have all four years split between us so I’m doing about two Sun, two Earth, one Moon and one Star class. I have a class from 11:30 to 12 after which I have lunch, either from the kindergarten if the day’s offering is edible or ordered in and sometimes occasionally brought from home when I want to feel like I’m sticking to my diet.

My next class is at 2:40 pm so I have a two hours and forty minutes break. Every school has different requirements for their teachers. Some insist that they stay in the school the entire working day. Others allow them to go and leave as they like as long as they show up on time for class. My school is fairly lenient and I could even go to the gym during my break if I wanted to, but for the most part I usually use the time to lesson plan or work on personal subjects such as writing blog articles or working on my novels. This break is not official and you can be called on to do things or sometimes one of the Chinese teachers will drop by the office to talk about the lesson plan but for the most part you’ll have the time to yourself. At 2:40 I have my afternoon lesson and from Monday to Thursday I’ll do an advanced class from 3:15 to 4:00 after which I’m done for the day. On Friday I don’t have the advanced class so I finish my last class at 3:10 after which I can head home if I want though again some kindergartens will make you stay till the official end of the working day. 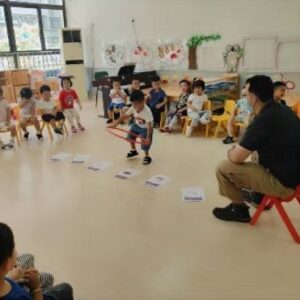 Each kindergarten has its own particularities but the general schedule is two hours of classes in the morning and then one or two in the afternoon. Last year, we weren’t greeting the kids in the morning but this year we are so that too can also change. Occasionally you’ll go on field trips, where you are basically helping chaperone one of the classes or participate in other activities, such as water fights during the summer. Classes can and will be randomly cancelled for one reason or another, if the kindergarten has a special event going on in the morning for, example, and then you hang out in your office and have an easy morning. Generally, any of the regular daily classes missed because of cancellation by the kindergarten do not have to be made up. In my case, my advanced classes do have to be made up since they are separate from the normal English classes, and the parents have paid for a certain amount of hours for the semester.

Why Should You Never Accept Free Accommodations !

Do’s and Don’ts of Quitting your Job

How is COVID-19 Going to Affect the Education Market in China?

February 23, 2020
Subscribe
0 Comments
Inline Feedbacks
View all comments
wpDiscuz
0
0
Would love your thoughts, please comment.x
()
x
| Reply
Not a member?
Sign up
Already a member?
Sign in
Back to
Login
×
Close Panel